Books in the Gift Shop

We have a wonderful wide range of books of interest to nearly everyone! You can order books from the Museum’s gift shop and have them shipped to you if you can’t visit to purchase them in person. Please call the Museum for prices on books not marked and for shipping details. All proceeds from every book sale go to the Museum!

Memories of a Colonel (Turtlehull Publishing, 2016) What begins as an engaging coming-of-age story of an adventurous boy born in 1927 in Little Rock, Arkansas, develops into an enthralling narrative of the life of a no-nonsense officer circling the globe in service to his country during wartime and peacetime. Originally written by Colonel James H. Phillips in 1984 for his wife and their three sons, this rediscovered autobiography reveals the spirit and the resolve of a true American patriot. ($20)

wn Precious One (Turtlehull Publishing, 2016) These courtship letters between George Sallie Smith of Princeton, Arkansas and Mollie Rose Byars of Pittsboro, Mississippi from July 1889 until their marriage in May 1890 reveal the beginnings of a mutual love and respect which would last throughout their lifetime together. Interwoven among the exchanges are detailed narratives of events in their homes and communities that give a rare, first-person account of the rural south in the late 19th century. Edited by Sandra Parham Turner, Melrose Smith Bagwell, and Doris Smith Beeson Faulkner. ($20)

A Taste of Tradition (Dallas County Museum, 2009) With over 350 recipes, this cookbook is a must-have for its variety of regional favorites such as buttermilk salad, black-eyed pea cornbread, deviled pork chops, orange blossom muffins, vinegar cookies, strawberry divinity, sugar-free desserts, and so much more! Each section is divided by pages with historic photographs of people and places around Fordyce. ($15)

The Branch and The Vine, a Civil War novel about two brothers from Kingsland, Arkansas who rode 900 days with N.B. Forrest, was written by Richard Ledbetter, an author and actor from Dallas County. His follow-up novel, Witness Tree 1910, deals with the post-Civil War reconstruction era through the railroad development that brought prosperity back to the South. Autographed copies available!

From Illinois to Arkansas, The Diary of First Sergeant Terry Axley, edited by William “Bill” Farmer, quickly launches into a transcription of the hero’s personal diary—beginning from the moment he enlisted in the fifty-sixth Illinois volunteer infantry during the American Civil War. He describes his training and active military service, which includes campaigns such as General William T. Sherman’s March to the Sea and Carolina Campaign. Including a full descriptive roster of every soldier in Axley’s company, this never-before-seen historical document reveals the fate of each soldier either during or after the war—along with what America’s bloodiest battles were really like.

The Battle Over the Dallas County, Arkansas Courthouse by Duane Jacobs

I Remember Paul “Bear” Bryant; Person Memories of College Football’s Most Legendary Coach, as Told by the People Who Knew Him Best by Al Browning is “testimony to the love that those who knew him best continue to have for him to this day.” Mama Called (DVD) is “a documentary that provides an in-depth look at the legendary Coach Paul W. Bryant through…Interviews from his family, friends, and former players…give an inside look at the life of Bryant from his early childhood in rural Arkansas, to his playing days at The University of Alabama, through his legendary career as a collegiate coach.”

RED Beyond Football: The Legacy of Coach Jimmy “Red” Parker by Mary Magee “traces his remarkable life from birth through fifty years of football fever, including Parker’s friendship with Bear Bryant, Larry Lacewell, and Dwight Clark.”

The Historic Barns of Dallas County, with photographs by Amber Garrett and written by Garrett and Agnes Phillips, director of the Dallas County Museum, captured many of the barns that were integral to farms in the county. This project was completed soon before most of the barns collapsed.

A Tribute to Our Troops Fordyce, Arkansas Area (Dallas County and surrounding areas) features photos of servicemen and women who served their country.

Our perpetual Dallas County Museum calendars make wonderful gifts! Filled with anecdotes and historical facts relating to Dallas County, these are $10 each or $15 for two! Buy one for yourself and a friend! 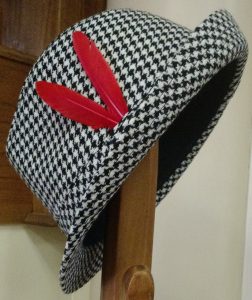 We also have a selection of other gift items for sale, such as the houndstooth hat like former Fordyce/Dallas County resident, Paul “Bear” Bryant wore! Handmade items by our museum volunteers as well as mini-quilts are also sold. Come by and see us and pick up a gift for yourself or a friend!